Visitors are safe and welcome at our museums. Please click here for details.

Fort Vasquez is currently closed for the season.

“The Fort Vasquez Museum is a valuable historical site. The staff is extremely knowledgeable and helpful. They offer activities on the weekends for kids, so bring the whole family.” - reviewer on Google

Fort Vasquez is currently closed for the season.

“The Fort Vasquez Museum is a valuable historical site. The staff is extremely knowledgeable and helpful. They offer activities on the weekends for kids, so bring the whole family.” - reviewer on Google 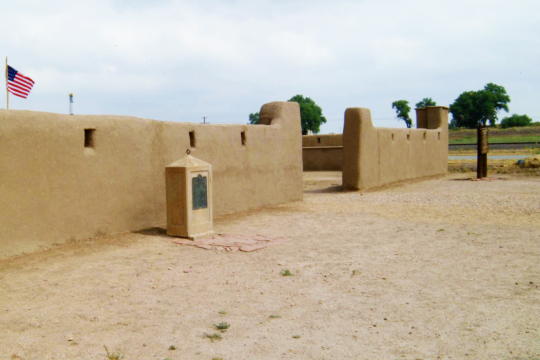 The fur trade in North America reached its height between the 1820s and the 1850s, and it was during this period that business partners Louis Vasquez and Andrew Sublette opened the fur-trading post Fort Vasquez in 1835. They constructed their business venture on the shore of the South Platte River, a location they hoped would be ideal as it was located about halfway between the already-successful Fort Laramie and Bent's Fort.

The trading post itself consisted of a large adobe structure about 100 feet on each side, with walls two feet thick. Mexican workers were hired to construct it, and at its height as many as two dozen traders and workers lived permanently at Fort Vasquez.

Fort Vasquez was in operation for seven years, until Vasquez and Sublette sold it in 1842. Later that year it was abandoned by the traders who had purchased it. Vasquez and Sublette moved on to work at other trading posts, forts, and outposts around the West. The old Fort Vasquez was briefly operated as a way station for wagon trains, and later the surviving buildings would serve as a bivouac, school, and post office before being incorporated into a ranch. In the 1930s the site was deeded to the county, and the nearby town of Platteville led an effort to rebuild the fort as a museum. The modern reconstruction is smaller than the original and has a different layout, but sits on the original site.

The current exhibit, More than Mud, tells the surprising story of how adobe shaped Colorado and the West in the first major exhibit since Fort Vasquez opened in 1958. Explore stories of the early fur-trading posts along the Front Range and the influence of Mexican builders on the largely treeless plains. View artifacts of the fur-trade era and the adobe history of the West, and learn how archaeologists explored the site and launched a reconstruction of the fort in the 1930s as a New Deal project. Visitors of all ages can get dirty in the adobe molding station.

Our new temporary exhibit is titled Frontiers of Fortune: Economic Booms and the Peopling of the South Platte Valley, 1840-2020 and Beyond. It explores the waves of industry and culture that came to Colorado following the conclusion of the fur trade and learn about the continuing story of immigrants and industry that shaped the current culture of northern Colorado. The exhibit will open to the public on February 25, 2020.

Take a Google Map tour below!