Skip to main content
Free general admission for kids, every day at all History Colorado museums.Find your local museum here!

In the early 1800s, President Thomas Jefferson commissioned several expeditions to explore the newly acquired Louisiana Territory. Zebulon Pike led one of these expeditions into what is now Colorado. His expedition led Saint Louis in July 1806, and reached the Rocky Mountains by early winter. Pike's team sighted a high mountain, which he simply called Highest Peak but which is now known as Pikes Peak, on November 15th, and wrote in his journal:

"At around two o' clock in the afternoon, I thought I could distinguish a mountain to our right, which appeared like a small blue cloud... When our small party arrived on the hill, they with one accord gave three cheers to the Mexican mountains."

The expedition continued south along the front range through the next three months, before entering the San Luis Valley in late January. Arriving at the mouth of the Conejos river on January 31, they followed the stream upriver before finding a suitable camp spot. There, Pike's team constructed a fortified wooden structure out of logs and timbers, which featured a moat, sharpened spikes along the outside, and only a foxhole for an entrance.

These defenses were made to protect the group from attacks by Native Americans and Spanish forces while they waited for a rescue party to return from retrieving a handful of frost-bitten soldiers the expedition had been forced to abandon in the mountains a month earlier. Pike had good reason to be wary of the Spanish: his encampment had been made in Spanish territory.

Zebulon Pike and five other men would be arrested by a Spanish colonial patrol for trespassing into Spanish territory. Pike conceded without a fight, and was escorted to Santa Fe to explain himself to the territorial governor there.

To this day it is debated whether or not Pike knew that he had crossed into Spanish territory, with some even arguing that the real purpose of his expedition was to spy on Spanish settlement in the region. Whatever his purpose there, Zebulon Pike's expedition was a notable prelude to later United States exploration, commerce, and eventual colonization of the Rocky Mountains. 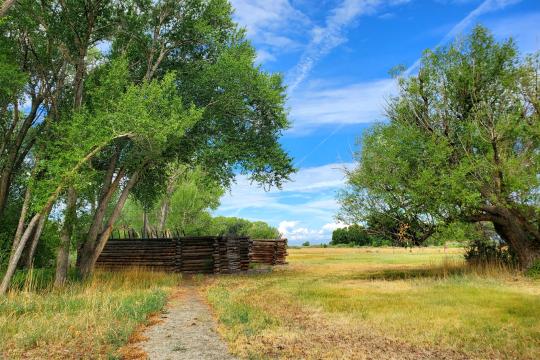